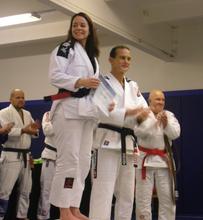 Caren received her Black Belt from Claudio França in December of 2010 to become the first female Brazilian Jiu-Jitsu Black Belt in the Monterey Bay Area. She has been training under Claudio since 1996, and was instrumental in establishing the first Bay Area-wide women's open mat, to encourage cross-training among the women of various schools. She also innovated the Women's Pro Challenge as part of the U.S. Open Brazilian Jiu-Jitsu Tournament and helped bring other Black Belt women to the area such as Luka Tavares and DC Maxwell to share their knowledge in seminars.  In 2005 Caren and DC Maxwell organized the Women's Jiu-Jitsu Summit in Philadelphia, bringing together women from all over the country for a weekend of seminars, open mats, and general networking.

Caren holds an MA in philosophy from Stanford University and is a lecturer at UCSC. She is also a registered yoga teacher and teaches weekly classes at Pleasure Point Yoga. Her jiu-jitsu classes offer practical drills, core-strength conditioning, and instruction tailored to students’ needs.