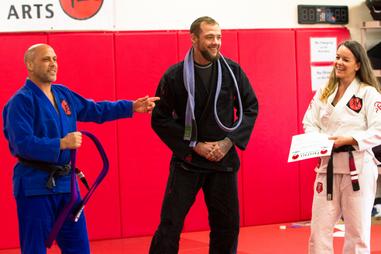 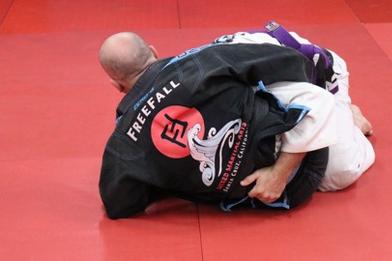 Brazilian Jiu-Jitsu is a martial art, combat sport and a form of self defense that focuses on grappling and especially ground fighting.

Classes consist of a warm-up followed by drills/technique practice and conclude with sparring, typically referred to as "rolling." Newer students will only be paired with those who can show you the ropes and walk you through the process.  As you gain more competence the intensity of your sparring also picks up.

There is normally no striking in Jiu-Jitsu sparring, unless the particular focus of the lesson is on using Jiu-jitsu to defend against strikes; instead, the focus is on grappling for a dominant position and causing your opponent to "tap out" via a choke-hold, joint-lock, or other submission technique.

Advancement & Ranking.  Brazilian Jiu-Jitsu uses a belt ranking system, which for adults runs White, Blue, Purple, Brown and Black.  Progressing through the ranks is a slow process and one must have patience, dedication, and consistency.

Attire: Regular practice of Brazilian Jiu-Jitsu requires a uniform known as a gi.  There are several brands on the market, but be sure you get one made specifically for Brazilian Jiu-Jitsu as the cut, fit, and materials are different from other martial arts' uniforms.  Brazilian Jiu-Jitsu can also be practiced without a gi (sometimes referred to as 'Submission Grappling' or 'No-Gi' Jiu-Jitsu). When practiced in this way, a rash guard and board shorts, grappling, or MMA shorts are the typical attire.