Attire: a rash guard and board shorts, grappling, or MMA shorts are the typical attire.  Since MMA is done with no shoes; we prefer you to wrestle without shoes.

To participate in amateur MMA matches in the state of California, you must be licensed through the governing body known as C.A.M.O. (California Amateur Mixed martial arts Organization).  To learn about the licensing requirements and process, please visit the C.A.M.O. website Here.

This is the actual application for an amateur license in case you're having a hard time finding it, HERE.

If you already have had a significant amateur career and are looking to go pro, then you need to visit the California State Athletic Commission and apply for a Pro Fighter's license directly through them.  You can learn more about at CSAC HERE. 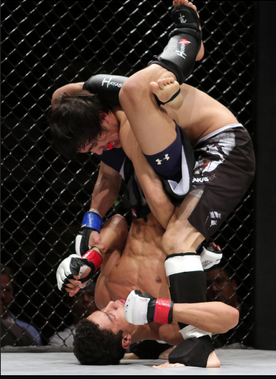 The sport of MMA (Mixed Martial Arts) entered the world stage in 1993 with the introduction of the televised event known as the UFC, which pitted various styles against each other.  At FreeFall MMA we focus on Brazilian Jiu-Jitsu, Muay Thai Kickboxing, Wrestling, Boxing (soon!) and Judo to provide our students with a well-rounded skill set.  As such, the bulk of your training for MMA will come through your participation in the arts that make up a competent MMA fighter. 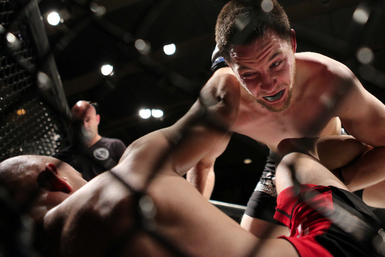 The MMA Class at FreeFall MMA is the one class that has prerequisites in order to participate.

Mixed Martial Arts is exactly that, a mixture of different styles in a contest pitting two individuals against one another to determine the winner of a fight, the rules of which allow for a range of techniques encompassing grappling and striking.

When you come to MMA class, you must already have a working knowledge of Jiu-Jitsu, Kickboxing, Wrestling, and Boxing or some combination of arts that give you such skills.

Since this is the class that ties together and adapts the various arts that contribute to success in MMA, we won't be teaching techniques per se in this class.  Instead, we assume you have a baseline of knowledge in striking and grappling arts which we draw upon for the situational drills and sparring sessions that make up this class.

MMA fighters are some of the best conditioned athletes in the world and we work with certified personal trainers to provide programs tailored to our athletes' needs.  These workouts are done outside of class time, according to each athlete's schedule.

If you are interested in competing, then we will talk about a training regiment for you.